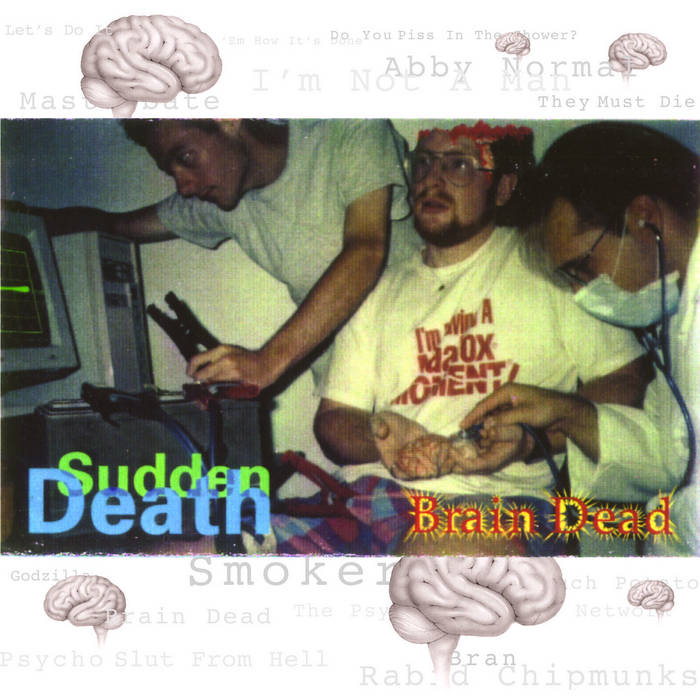 After the release of Noise Pollution, Devo Spice set to work on more material. Through his junior and most of his senior year in college he worked on new songs, but was still only able to record them when he was home on break, as the dorms and later the on-campus apartments were barely suitable for living in, let alone recording in.

Brain Dead was the first Sudden Death release to feature a full-color album cover. Keep in mind, this was before the era of cheap color copies. Devo's future wife Jennifer was also in the picture by this point and she lent her design skills to the album's layout and lyrics insert. She hadn't yet caught on that this music thing was more of an obsession than a hobby.

In early 1995 Devo got his first computer, a PowerMac 7100/66, and quickly discovered an audio editing program from Macromedia called SoundEdit Pro 16. Most of the album was already done by this point, but three songs had their music done on the computer: "Abby Normal," "They Must Die," and the title track, "Brain Dead." Devo was still learning the ropes, so most of them were recorded at 22kHz.

One of the first tracks recorded for this album, "The Psychic Enemies Network," was aired on the Dr. Demento Show in late 1993. It was also included in a 4-song EP called Brain Damage which was used to promote this release. 100 copies of Brain Damage were given away to people from the alt.rap and rec.music.dementia newsgroups. Only 2 of them went on to buy Brain Dead. This is an early example of Devo's absolutely stunning marketing skills.

If you're wondering why they didn't email files to each other, keep in mind this was 1994 or 1995. MP3s didn't exist yet, and Devo got online with a 2400 baud modem. It would have taken days upload an audio file.

This album was released on April Fools Day in 1995. The sides of the tape were labeled "Left Brain" and "Right Brain" because Devo is just that damn clever.

The brain dead crew of Sudden Death would like to thank Dr. Demento, None of the Above, Joseph "Dave" Flanagan, Thom Uliasz, Steve Fernino, Sue Winter, Jeff Cots, Walt Spader, Tony Mica, Joe Leniart, Jennifer DelGrosso, Onyx, Positive K, Beck, Warren G and Nate Dogg, everyone who bought the last two demos, all the DJs who have played our stuff on the radio, Paulo Valemtim, Flash, late night TV psychic phone lines, mall survey people, a certain girl I went to school with who shall remain nameless, David J, Laze, top 40 sell-out rappers, my remote control, everyone who requested "Brain Damage,"... and a partridge in a pear tree.

All songs produced by Sudden Death for no particular reason.
Tony Mason appears courtesy of None of the Above.
Sue Winter, Jeff Cots, and Walt Spader appear courtesy of their own spare time.
Cover photo by Jennifer DelGrosso. Retouching by Tom Rockwell.
J-Card and booklet design by Tom Rockwell.
Reproduction by Frank Scheidt.