Dead Things Can Rap Too 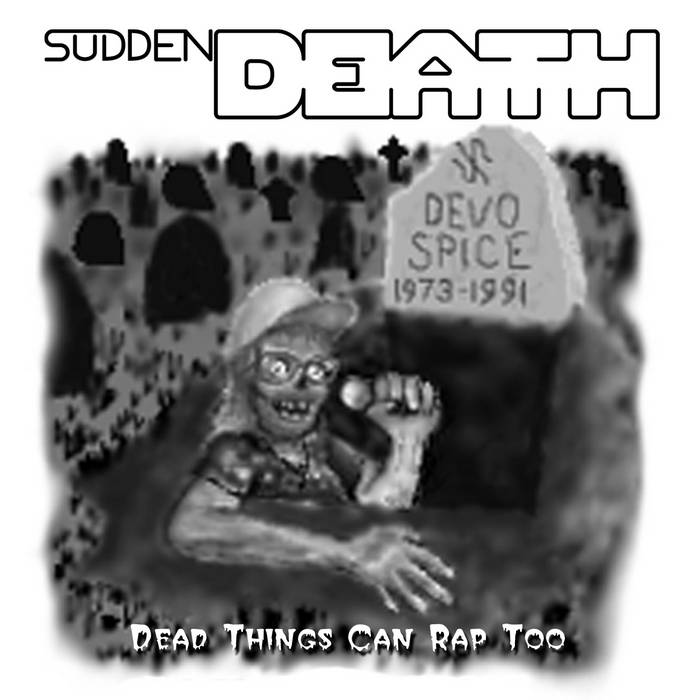 Sudden Death formed in 1986 as a trio consisting of Tom "Devo Spice" Rockwell, Dave "MC Squared" Floeting, and Scott "Baksai Nok" Usilton, although using the word "trio" is generous, as Devo Spice did 90% of the work.

Over the years that followed the group recorded many, mostly terrible, comedy-rap songs. Then in 1990 the group got its first taste of success when Dr. Demento played "I'm Bored" on his nationally syndicated radio show. Devo liked this taste and, in an attempt to step up production, restructured the group. He took the lead as Dave faded into the background. Scott wisely took this opportunity to resign and Devo brought in Jeff "Bozhead" Cots, Thom "Tha Perfessor" Uliasz, and Steve "Piles" Fernino to help out.

Despite effectively going solo Devo kept the group name Sudden Death because he believed his new legion of fans from that one Dr. Demento spin would be lost if he changed it.

Then In the fall of 1991 Devo Spice's friend Tony Mica independently released a 4-song EP for his heavy metal band Nothing Sacred. Devo did the cover art for this release, and it inspired him to do something else. Armed with a back catalog of over 50 Sudden Death songs, Devo Spice decided to release his own independent album.

During his Thanksgiving break from his freshman year at RIT Devo re-recorded 11 of what he felt were the best Sudden Death tracks to date. He also created two new tracks for the release, and included the version of "I'm Bored" that was aired on the Dr. Demento Show.

The result was Dead Things Can Rap Too, a 45 minute cassette release of mostly comedy rap songs. There were two serious songs on the album, one leftover from Devo's short stint in the KC101 rap contest, and one written as a challenge to himself which was later performed at his senior prom, much to the shock and confusion of his classmates.

These recordings are being presented here in their original, low-fi glory, complete with tape hiss, clicks, and artifacts from the cheap 4-track that was used to record them.

Special thanks to my parents for putting up with me for the past 18 years.

Guests include Kassa Overall and Muriel Grossman, plus an LP of the week by Van Hunt.